On Tuesday 25th June at St Francis Church, an unusual chamber group gave a virtuosic performance of a number of different and diverse works.  Violist Pierre Henri Xuereb has made numerous appearance at VIAF and through his contacts, superb ensembles and soloists have also given their contribution in the Festival.  For the evening’s concert, he joined another brilliant violist, Riuxin Niu, from South Korea, and double bass virtuoso Gjorgji Cincievski, leader of the double bass section of the Malta Philharmonic Orchestra.

The opening duo by Wilhelm Friedemann Bach, eldest son of Johann Sebastian Bach, for two violas, sent the right tone for what turned out to be an exquisitely fine concert.  This work was particularly lovely especially with regard to its melodic inventiveness and harmonic flexibility.  As expected, the contrapuntal expertise was never far off the surface: points of imitation, canons, and two-part writing abounded with gusto and aplomb, and the two performers displayed musical intelligence as well as astonishing technique in tackling this work.

Roxanna Panufnik’s Canto for Solo Viola came next, which was performed by Riuxin Niu.  It is composed in a Fantasia style on an Ashkenazi Cantorial Chant.  This work is exciting in the way it combines traditional form with contemporary harmonies.  The performer came into her own, exhibiting controlled confidence and assured technical prowess.  Another duo for violas was Manuel Ponce’s Sarabande.  It is a work which betrayed the sedate, elegant and stately phrasing of this dance form which was a staple of the Baroque Suite.  The inner harmonies had an edge in that the dissonance of the 2nd and the 7th were present the desired resolution was not always forthcoming.  The same could be said for Bartók’s Duos for 2 violas.  A formidable work which looks forward to the more complex pieces in his Mikrokosmos, these wonderful pieces are constructed with considerable harmonic and contrapuntal sophistication, and, despite their use of folk tunes, are written in a distinctly modern idiom.  Bartók fragments, develops, and manipulates his chosen folk tunes in the Duos, placing them within the context his own harmonic sense.  The textures are simple, double stops are used only occasionally, and aside from some pizzicato passages, no special bowing or other playing techniques are required.  Nonetheless, they are rife with aurally challenging bi-tonal passages, polyrhythms, and plenty of brash dissonances.  One of the pieces was performed by the double bass — here, Cincievski gave a discreet appetizer of his formidable technique, which naturally came more to the fore in the last piece on the programme, a Trio.

But before that, Pierre Henri, performed Joseph Vella’s In a Pensive Mood op. 141, a fairly recent work by the Gozitan master.  This engaging piece for solo viola sets out to express several contrasts of mood – aggression, lyricism, anger, resignation.  To achieve this spectrum of feelings, the work makes use of unusual technical effects, such as playing behind the bridge, col legno, tapping on the body of the viola, etc.  This work was given its premiere performance by Pierre Henri Xuereb himself at the Palais des Beaux Arts, Montpellier. On 31 January 2015 to great critical acclaim.  He gave a masterful rendition again during the evening’s concert.

The next work saw Pierre Henri pair up with Gjorgji for Dittersdorf Duo in Eb Major for Viola and Double Bass, a truly magnificent work which is not for the faint-hearted.  The Andante first movement is structured like a Baroque piece in that the main melodic interest is on the viola with the double bass largely settling down in the role of a basso continuo.  That said, however, there came moments when the roles switched and the double bass accompanied the viola in thirds.  The dynamic range was largely a forte / piano dynamic, which is also a salient feature of Baroque writing, together with the question and answer pattern that is largely implemented for dynamic contrast.  A shortish cadenza preceded the repetition of the original utterance before the movement comes to a close.

The Menuetto and Trio stayed in the same key of Eb Major.  It moved in the graceful phrasing of the classical Minuet.  In this piece, the double bass came more to fore as far as melody was concerned, relinquishing its role as accompanist it largely had in the first movement.  The Trio moved at a slightly slower pace before the Menuetto was repeated.  The ensuing movement was a beautiful and evocative Adagio which fully exploited the instruments’ dynamic and tonal range.  This was then followed by another Menuetto and Trio which was taken at a marginally faster tempo than the first one.  The very difficult Theme and Variations was taken up immediately afterwards, with the theme being announced by both instruments at a difference of an octave.  In this demanding movement, the double bass emerged in all its technical and dynamic power.  The main theme was shared equitably between the two instruments, with florid and melismatic accompaniment on the accompanying instrument.  This was a tour de force for both performers.

The last work brought all three wonderful musicians together for a performance of Hummel’s Adagio and Minuetto for Trio.  This work is reminiscent of the late Classical period in that while there is a Classical adherence to form, the dynamic intensity of the piece looks forward to the early Romantic pieces such as those of Beethoven.  A truly wonderful interpretation and a thoroughly enjoyable concert. 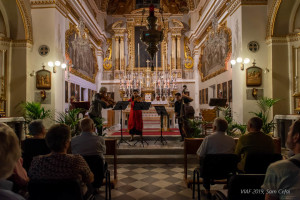 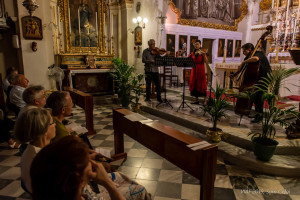 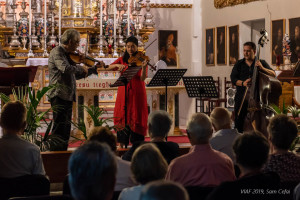 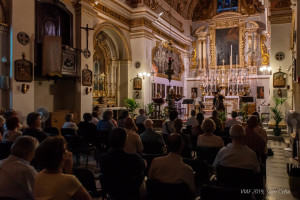 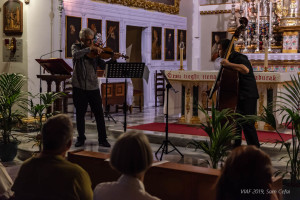 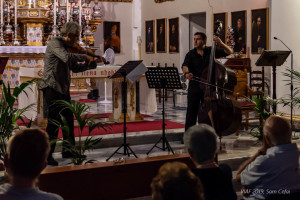 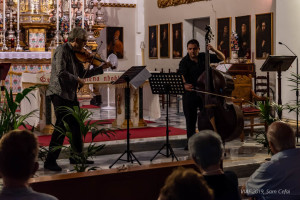