This year’s (22nd) edition of the VIAFestival has been dedicated to Joseph Vella, its co-founder. The penultimate concert of this edition was dedicated to his memory and it was the brain-child of distinguished double-bass player and teacher Gjorgji Činčievski, first double-bass with the Malta Philharmonic Orchestra. It was the kind of concert which would have been much to the liking of the late Maestro. Vella was a great innovator and pioneer and I imagined him to be smiling benignly during yesterday evening’s concert in the hall of the Ministry for Gozo.

The novelty was there, because definitely as regards our Islands, no trio of double-basses has been known to exist. Činčievski has formed his own trio with Michelle Scicluna, an experienced colleague with the M.P.O., and the 16-year old very promising Kathryn Mizzi from Gozo. She has been Činčieski’s pupil for just two years.

Now among Činčievski’s gifts one finds arrangements of other composers’ works for his instrument, either solo or with another instrument. The evening consisted of such arrangements except for Invocation by.M. Gajdos for solo cello which Činčievski first performed in Malta in 2012. It spans almost the whole range of the instrument whereas in an arrangement for three cellos the concert’s opening work based on Joseph Vella’s motet Sicut Cervus op. 78, shed a new sonorous light on the work originally scored for SSA chorus.

I would say that Vella’s Elegy op. 65 for Cello and Piano or Orchestra is one of his most popular works and Činčevski’s version with piano added to it a different sonorous dimension. He performed to accompanment by pianist Francis James Camilleri. The latter was at the piano too in another arrangement, this time including two double-basses. The youngest lady member of the Trio performed Glière’s Intermezzo and Tarantella. As regards intonation in the Intermezzo Kathryn Mizzi seemed to have a few uncertain moments. However in the much faster Tarantella she dealt very deftly and with vigorous brilliant prestidigitation. Not at all bad for one who has been studying d-bass for a mere two years!

Young Camilleri was busy again in another transcription of a Vella work, the time Canti op. 88, in two movements and performed with great balance by Gjorgji Činčievski and Michelle Scicluna. It retained the significant contrasts between the two movements which constitute the work. Later the trio and pianist performed Popper’s beautiful Requiem op. 66, originally for three cellos and piano.

The concert also included the world premiere of Činčievski’s Portraits of a Thought. It is dedicated to Joseph Vella (who had given permission for this evening’s transcriptions) and finished in March this year. Its genesis was a thought Vella spoke of with the composer. This was around 2016 or ’17 when Vella mused about the tonal possibilities of double-bass. He also remarked about dissonance and consonance in music and how the former was not so hard on the ear as it was in the past. He also likened these contrasts as a fight between good and evil with the former winning out. These elements find a voice in this Portrait with at first the instruments going their own way and getting together to round off the work. One hopes to hear this work more often for its positive message of hope.

The concert ended with the double-bass trio and pianist performing that evergreen poplar Waltz n. 2 from Shostakovich’s popular Jazz Suite, received so warmly that inevitably it was encored. 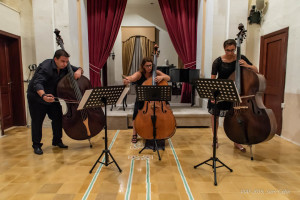 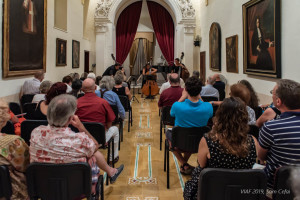 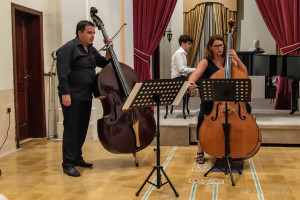 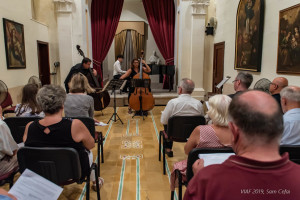 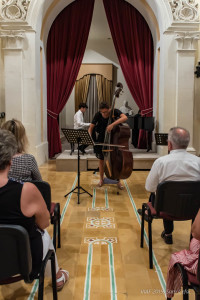 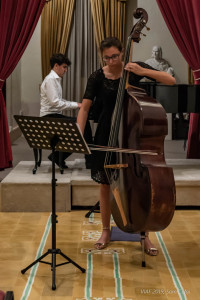 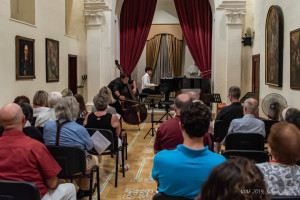