Piano recitals carry gravitas; the onus rests solely and entirely on the shoulders of the performer and the pressure could be intimidating.  If this were so during the evening’s performance on 2 July by South Korean prodigy SoYeong Kim it didn’t show.  She sailed through the programme with the elegance of a swan and the daring of a Ruppell’s vulture.

The evening recital started with Bach’s colossal Chromatic Fantasy and Fugue in D minor BWV 903, a work that makes lesser mortals run for their lives.  Playing entirely from memory, SoYeong Kim tackled this great piece with respect and confidence.  The Fantasy consisted of three main sections: the first being a true Prelude, the second a recitative-like section, and the third a mixture of the two.  It opened with a melodic flourish, as if the player were improvising on the tonic chord, before the main thematic material comprised of broken chords, began in a subdued manner.  The music became more dramatic and virtuosic as the theme developed with rapid scales and arpeggios dominating this first section.  The recitative-like section began in a contemplative mood, but the music then threatened to become more challenging, requiring extreme emotional sensitivity, which the performer amply produced.  The third section combined the two elements in a virtuosic drive to the end.

The Fugue began in a strict style but gradually loosened up, revealing elements of the Fantasy.  It opened with a long and complex semi-tonal subject.   Sculpted in three sections, there were eleven entrances of the fugal theme.  Every entry of the theme contained an element of uncertainty (not on the performer’s side), yet each seemed to be anticipated by the previous one.  The first section stayed mostly in D minor, while the second section modulated as the theme is introduced in distantly related keys.  The third section returned to D minor and ended with bravura passage work, scales, and ‘organistic’ octave doubling in the bass. A truly wonderful rendering!

When one would have thought the performer would offer herself some respite, one of Liszt’s Sonetti del Petrarca rapidly followed instead.  It opened with a lamenting melody under a gentle flow of accompaniment before the music typically took on a more dramatic tone.  The dramatic silences between the different thematic material filled the role of lead actors in the unfolding drama no less than the played notes.  They were significant not only to the work’s musical form but to its effectiveness in performance.  The chromatic harmonies were rich and complex but without a dissonant edge.  From the outset, the ear was immersed in a wandering, ever-changing atmosphere; from the first diminished chord through the following measures, the harmony never cadenced but floated in gentle anticipation.  As is typical with Liszt’s piano works, the music is composed in fragments put together, which foreshadow or recall, in a novel-like fashion, certain emotive moments or themes.  This work acted like a dramatic recitative and aria of a Bellini opera with its bel canto style and long overarching melodies.

Chopin’s utterly ravishing Ballade no. 4 in F Minor op. 52 came next.  This magnificent work, replete with the whole gamut of emotional resonance, is dedicated to Baronne Nathalie de Rothschild.  As Francis Camilleri intelligently wrote in the evening’s programme notes, it follows the general pattern of its predecessors in relying on episodes of contrasting mood and thematic transformation, alternating very simple phrases with passages of great elaboration.  The gentle opening was harmonically ambiguous, but settled into a delicate, wistful, decidedly F minor Slavic theme.  Chopin repeats the theme, but not exactly; he alters the phrasing and the elaboration of the melody in subtle, expressive ways.  The theme’s next appearance was delivered in a suitably more troubled and fragmented manner in that it became more agitated with the addition of an ornamental countermelody.   The final section was particularly turbulent, ending with four feverish chords. A very beautiful and evocative performance!

Three Debussy pieces from the gorgeous Estampes came next, namely, Pagodes, La Soirée dans Grenade, and Jardins sous la pluie.  Each has its own idiosyncratic colour, as typical in Impressionist paintings.  SoYeong brought these subtle hues to the fore, without either exertion or conscious effort.  Like a Monet water-lily the music floated, uninhibited and unshackled.  The last piece on the programme was Takemitsu’s Golden Slumber a very famous piece originally written by John Lennon, of Beatles fame.  Takemitsu endows this melody with his own characteristic harmonies, to weave a tapestry of rich sound and suffused colour. 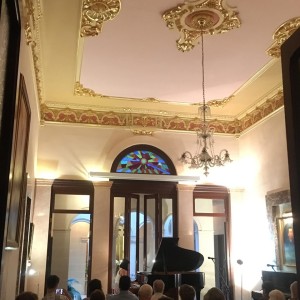 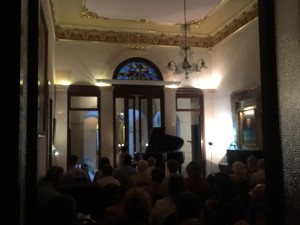 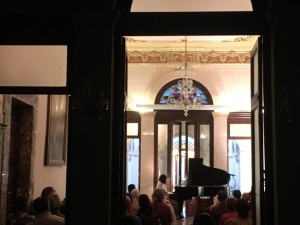 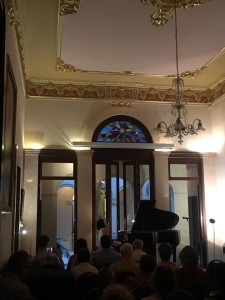 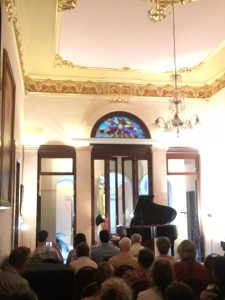