The truly international dimension of VIAF is constantly being consolidated.  This year, the Festival invited Ukrainian organist, Elena Chernikova, to give a recital on the beautiful Mascioni organ at St Augustine’s Church in Victoria.

The programme consisted of a variety of works, from the most canonical such as Bach and Frescobaldi pieces, to less traditional ones, namely, an arrangement on the ever fresh ‘Greensleeves’.  One of the major tasks an organist needs to master is the combination of the various and diverse registers which enable an organ to quite literally tap all imaginable sounds it is potentially endowed with producing.  This technical aspect is one that Chernikova fully mastered.  Although the bulk of the repertoire she chose to perform tended towards the softly nuanced rather than the more extravagant and gigantic the instrument is so capable of producing, yet she was perfectly capable of eliciting minute gradations of tone in a dynamic spectrum that was on the whole limited.

Two movements from Gigout’s Dix pièces pour orgue, namely a Minuet and a Toccata set the right tone for the recital.  The Minuet unfolded in the expected classical pattern while the Toccata was a showpiece of technical virtuosity.  Bach’s Chorale Choral ‘Schmücke dich, o liebe Seele’ BWV654 is a typical piece by the master, fully exploiting the harmonic and dynamic possibilities he engaged with.  Toccata Quarta by Frescobaldi provided a stark contrast to the one by Gigout in that it offered no dramatic moments but simply unravelled in an almost confessional manner.

Alain’s Jardin Suspendu is composed in the typically nuanced French style of the early twentieth century.  We find here the residue of the wonderful Impressionist movement that emerged from France at the end of the previous century in that the primary concern in this work was a sort of a paradoxical secular mysticism that is to typically French.  De Klerk’s 4 Inventions and Goncharenko’s Chaconne further investigated the dynamic possibilities inherent in the softer shades of the instrument, while the arrangement on Greensleeves made by Purvis was an exercise in harmonic piquancy.

Widor’s Symphonie Gothique no. 9 op. 70 is arguably one of the best-loved pieces in the organ repertoire.  The second movement played during the evening’s concert created a most calm and quietly-celebratory ambience, while the final piece, Piazzolla’s Milonga sin Palabras, arranged by Chernikova herself, proved a fitting close to a delightful concert.  Throughout, Chernikova displayed her ability to switch moods and styles through her careful choice of register, while her clear dexterity and articulation were never in dispute! 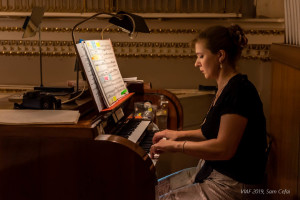 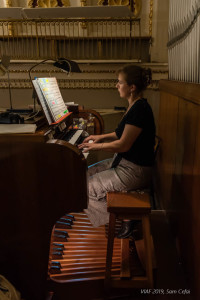 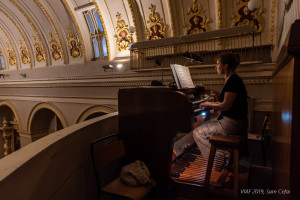