Pianist Biliana Tzinlikova, Professor of Pianoforte Performance at the legendary Mozarteum in Salzburg, saved the day on Sunday 23 June when she stepped in at the eleventh hour after her fellow trio performer felt very ill and had to be hospitalised just before she was about to fly out of Austria to perform in VIAF.  Biliana offered to perform a solo pianoforte recital, choosing a programme of works dedicated to female composers, including Clara Schumann whose 200th anniversary of her birth is being celebrated this year.

In fact, the recital started with Schumann’s Sonata in G Minor.  Clara Schumann was no slave to convention and cast her first movement on the whole in a rather striking form, and even the exposition stands out for its tripartite theme. The opening motif was stated gently at first by Tzinlikova, then more energetically, a rocking phrase entitled ‘Mit tiefer Empfindung’ was inserted in between the first two motifs.  The E flat major secondary theme derived from the main motif by inversion, which was followed immediately by a playful episode ‘Urn vieles schneller’.  Less thematic in character, it seemed to function somewhat like a development section before leading into the close of the main theme by a long upbeat.  What might seem to be an overabundance of material in the exposition was economized in the actual development section, which only fleetingly took up the first of the two main themes in order to devote itself more exhaustively to the second.  The slightly shortened recapitulation – with the secondary theme and the spirited section in G major – was followed by a Coda in the minor mode, marked Animato with a short Andante epilogue.  This epilogue was based on the closing turn of the exposition, which was vividly highlighted by a three-fold repetition, and succeeded immediately by a succinct and transparently worked-out Adagio in E flat major that echoed the concluding motif of the preceding piece.  The Scherzo, which was published as no. 4 of Clara’s op. 15 came across as the most attractive of the four movements.  Its melodic inventiveness, sprightly mood, contrasting with the elegiac tone of the E minor Trio, and compellingly symmetrical formal design all contributed to its success.  There was some exquisitely elegant playing by Tzinlikova here.  Equally effective was the lively, virtuoso Rondo finale, which bore undisguised thematic references to the Allegro.  It revealed the composer’s impressive mastery of formal design.  On the whole, the Sonata in G minor was a singularly attractive, harmonically captivating, and pianistically demanding piece, which paid full honour to its composer.

Next on the programme was Louise Farrenc’s Variations op. 10, a work that attested to the very fashionable ‘Theme and Variations’ style prevalent in the age.  Farrenc works the main melodic line of Onslow’s catchy tune ‘C’èst la fête de village’ .  It started with an introduction that was orchestral in its power which then led into the inevitable purity of line and exquisite tenderness of an Onslow melody.  This was the main theme which then developed into a series of variations, some mesmerising, others calmer, some fiendishly difficult, others suave.  It was a piece that tests the mettle of any self-respecting performer, a challenge to which Tzinlikova rose up easefully.

Clara Schumann’s Romance no. 1 op. 21 came next, a romantic piece in the conventional style of the age, while another Farrenc piece, this time the very famous Air Russe Varié op. 17, was a virtuosic display of very difficult passages.  The last item on the programme was Tailleferre’s Partita, a sparkling and quintessentially French piece in its use of modernist techniques.  It shows the clear influences of Fauré and Debussy, and there was a barely perceptible veneer of irony beneath the shimmering surface of musical pirouetting of the Perpetuum mobile.  The Notturno glossed over a harmonic fabric that was reminiscent of late Impressionism, while in the final movement, Allegramente, the dreamy quality of the previous movement was replaced by a more robust style.  Yet, despite the three distinct moods pervading the Partita, typically, in the hands of Tzinlikova, the work never lost its characteristic French qualities of elegance and refinement.  It was a remarkably fresh work, justifying Milhaud’s comment that “Germaine Tailleferre’s music is always twenty years old”.

This was nothing short of a dazzling performance, one that attested to the superb technique and musicianship of the Bulgarian-born pianist and musicologist. 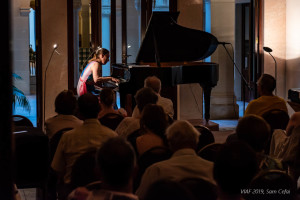 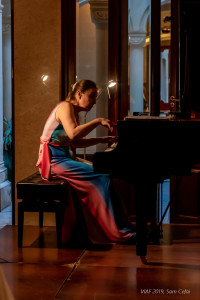 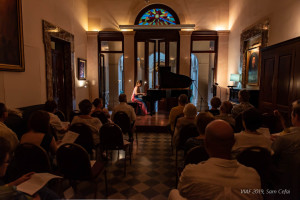 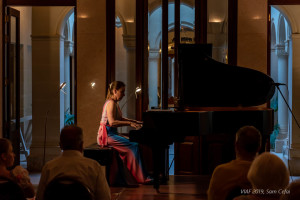